Russell Is Working It 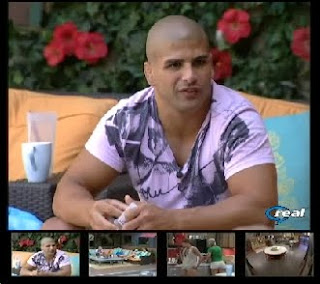 An hour or so after he had a conversation with Natalie (who repeated everything to the rest of the house), Russell is now pleading his case to Kevin. Although he confronted him about laughing with Chima when she was calling him a terrorist, he's claiming that he's played a clean game and has never lobbed any character attacks to not only Kevin but Jeff and Jordan.

Natalie joined them, and she's moved the conversation on to how Michelle has screwed him over quite a few times.

Can Russell save himself? Highly doubtful, but all he has to do is convince either Jordan or Kevin. Natalie keeps claiming that she's alone, which is certainly a lie, but could Kevin be convinced that it's a good move for him to vote against Natalie? Not a chance.

Aint no convincing Jordan, she wanted him out more than Jeff did and then he called her a lapdog, I dont think so. Kevin has hated him from the beginning and pushed hard for him to get put out everytime. Hes a goner dude unless Jeff is scared that Russell is going to do something when he gets to the jury house which I doubt seriously.

This is a damm game, you just cant beat everybody up that goes against you. Bye Russell and dont let the door hit you in the ass on the way out. LOL

Instead of blowing up at Jeff, who started the conversation in a somewhat civil tone, Russell should have attempted to set the record straight. Admit that the Jessie vote was a bad move, but push on him how Michelle had been pumping him with bad info.

the problem is that whenever these people suddenly act buddy-buddy, they're horrible actors. At least through most of the season Russell has been friends with Jeff.

Instead, his temper tantrum, while understandable, sealed the deal unless a miracle happens with Kevin's vote. But we all know that even if Kevin starts to slide in that direction, spending the night in Natalie's room will change that outlook.

For sure it will, Natalie will be the one out if Russell stays, she would be a fool to sit by and do nothing. And to be honest with you, Michelle may give him the vote because she heard him tell Jeff he was going to beat him up when he gets to the jury house. Shes probably scared to death now that its going to happen to her. Where do big brother get these scary ass people from anyway.

Beating somebody up when they get to the jury house.

Trying to bully his way thru.

what a damm joke