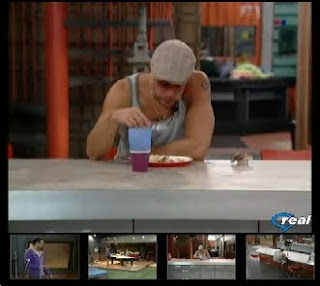 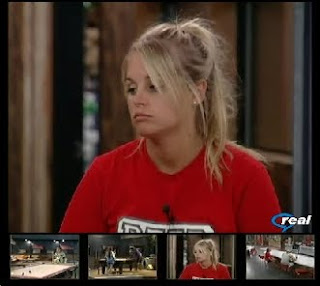 To say that Jeff is not happy is an understatement. "If I had known that (Kevin) would have put me up, I would never have gotten him (out of the box)."

Otherwise, it's a pretty uneventful night in the house. Natalie is cheating at pool against Kevin, and Jeff is acting like an ass towards Jordan. He does have one valid point, though. She seems to believe whatever Natalie tells her, and he's saying she shouldn't listen to those "assholes". Hehehe.

Oh, please, Jeff, the DR must have done everything short of showing you video of the scheming and you said you didn't like how they were talking to you!

Flat out, Jeff threw the F4 plan out (no thanks to Michelle, but that was her social ineptitude rather than scheming) and trusted his enemies.

In the words of Jeff Foxworthy, "Well, DUHHHH!"

As far as strategy and ruthlessness, they really should be writing out the check to Natalie right now, because she has outplayed everyone, and the only person surviving with her will be the one she is sure will not get that 4th vote. So Kevin is out to avoid splitting the Team Jesse vote. Jordan out because if there's a 3-3 tie and America votes, Jordan could win. Jeff might be slightly safer for her on Jury votes, but again the AC risk.

Natalie and Michelle, anyone? Michelle should be able to completely mess up her Jury interview and Natalie will be well rehearsed.

And after she has the money, expect Julie to tease that Natalie has had a secret since day one, and then her age will be revealed, perhaps leading to a bit more embarrassment for the Jury, who have been royally 'had' by her all season.


Or am I completely off on this (been offline for a few days, probably missed some things)?

Cal im still not convinced that Natalie is going to win this but it is possible. They all should know that it will be hard to beat her in the end. Even Kevin would be better off to take Michelle to the end and Michelle will def not take Natalie. Just count out Jordan, shes will be even less a factor after Jeff leaves.

I think Michelle would probably be better off taking her chances against Jordan since she havent done anything in the game. Its going to be hard for her to beat either Kevin or Natalie

I don't see Jordan getting 3 jury votes. She'd more than likely get one from Jeff, because he's still trying to go for the gold outside of the house, but there is no way Russell would vote for her over Natalie. Russell, more than anyone, understands that this is a game and I'm sure as soon as he compared notes with the other jurors he'd be able to come to the conclusion that Natalie was playing a far more aggressive and a smarter(debatable) game than whoever she is sitting next too, especially Jordan. Michelle would be the wild card vote in this scenario, because Jordan has been friendly with her the entire time more or less. But again, I'd like to think that Michelle is smart enough to realize that Jordan did shit all to progress in the game, other than clinging to Jeff.

Cal does make a valid point about Michelle in the final 2 though. She will no doubt botch her jury questions which I assume would hurt her quite a bit. Although cooler heads do seem to prevail once the HG's have had time to simmer down in the jury house. She'd more than likely have Russell's vote as they were still pretty much working together when Russell was booted. And it would not surprise me in the least to see her get votes from Jeff and Jordan, considering they both found out that trusting Kevin and Natalie was a bad idea. So with a 3-3 tie, if America works as the tie breaker, Michelle takes home the prize.

In my opinion the best option for all Michelle, Natalie and Kevin would be to plan on taking Jordan to the final 2 with me. Though she hardly deserves the 50,000 dollar runner up prize, they'd more than likely have the best chance of winning if they were sitting beside her, rather than one of the other two.

I still say Jeff for sure and Michelle just out of the fact that she hates Natalie would rather see Jordan get it rather than Natalie. but I kinda agree with you bish that Russell probably will not but im just not sure. Ive seen stranger things come out of the voting and I think the 7-0 mudslide of Memphis is a good example.

Memphis didnt get votes for several reasons and the main reason is he wasnt friendly at all to nobody but Dan. Even the people aligned with him didnt like him. Renny didnt like him, Keesha, hated him after what he did and the rest of the people in the house didnt really like him either. Dan was nice to everybody and was not half as arrogant as memphis although he was the one that really put most people out

If Natalie dumps Kevin to carry Jordan to the final 2, i can def see him giving the vote to Jordan and convince Lydia too. In my eyes, Jordan dont deserve no votes for her game play but so many times, people vote out of hatred and revenge and I wouldnt be surprized what a Lydia might do when it come down to voting for Natalie to get all the money. She would def vote for Kevin but she didnt even shake Natalies hand when she left so there is some annimosity there

It will be interesting but i think you can just about tell where everyone would vote except Russell and Lydia with Natalie. Jordan will only vote according to what jejf wants. she dont have a clue