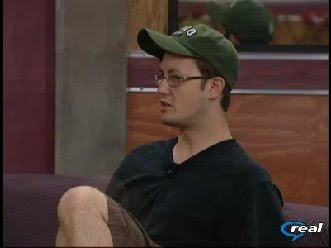 Ever since Michelle won veto, the feeds have been extremely boring. Ronnie has attempted to sway almost everybody in the house, but only Chima appears to be buying into his schtick. Most of the attention has been on Michelle, who definitely isn't paying any attention to him. Just a few minutes ago, Ronnie claimed that he has "added" people to the alliance he earlier claimed he didn't have.

One interesting conversation was held last night, though, as Michelle had a lengthy conversation with Jeff (and eventually Jordan) about teaming up.

My coffee barista at Starbucks this morning referred to Ronnie as the "Gleep."

Why Gleep, I asked her?

I like to call him Gollum and I was on another BB site last night where somebody else was calling Ronnie Gollum.

Russell has more substance than I first thought. My wife says that he uses the word fuck even more than I do. But, I thought he was just another meathead at first. That is now obviously not true. He has education and is aware of what education means.

Russell, Michelle, Jeff, Jordan, Lydia and Kevin could make a quick team to take out the two circus performers.

I am hoping that happens but I hope Natalie takes a bath, first. I can smell her over the computer and she is nasty.

Russell has been playing the same game since day one. Hes just positioned himself to be able to roll with either side, Since it looks like hes done left Jesse and Ronnies's team, hes a genius now.

He will be right back with them if the power goes back. "bet a 100"

Jeff knows it too