A Little Bit of Excitement (Not Really) 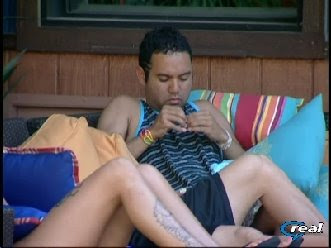 Kevin apparently snuck a bite or two of something besides slop this morning, and just received word that he would receive an extra day of slop as a punishment. Luckily, it wasn't a penalty nomination as some had predicted.

Natalie's taking credit for tattling, but what was especially laughable was her idea to go to Russell with a bunch of lies about Michelle. Her and Jessie concocted a story that Michelle really wants Ronnie to stay, and was asking if they are on board.

Afterwards, Natalie gloated that Russell believed their story, but instead he ran outside and laughed about the situation with Michelle. Unfortunately, little of that was shown as the Kevin situation flared up.

I would love to know why Jesse and Natalie are allowed to sleep in the bubble room but Kevin can't eat. Just saying....

He didnt seem to believe Jesse and Nat. First they sleep all the time and Michelle isnt a night owl so when did they talk? ( BTW Russ asked that a few times " What time was this" ). Second they just wake up and only Ronnie and Chima are in the house and they ask to talk to Russ in private. Third, They didnt even think their story thru. It made no sense. Hopefully Russell saw that right away. Jesse and Nat think they can sleep all the time and still know whats going on in the house.

REBECCA, IM SURE WE ALL ARE GOING TO MISS YOU IF YOU DONT WATCH ANYMORE... WHO CARES

I wonder why Kevin got away with eating grapes yesterday and no one said anything about it. Thats strike 2 if you ask me. But of course Tressa, you didnt see that or you was just saying.... lol

Also, ive seen people sleeping in that room all the time. The only room that ive ever seen big brother really inforce was the living room. They ask them not to sleep back there but they never inforce it. Maybe we should complain about them sleeping outside too. I saw Casey sleeping out there a few mornings even in his going away present(the banana suit) im just saying..... lol

Also Rebecca, if youre been watching the feeds, you know the only way Ronnie is staying in this house is he win the magic wand which will not happen because it was designed for My main man Jeff.

Jeff will hold on to it after Ronnies gone, eliminate Jesse or Natalie next week. And him and Russell will start to mowing everybody down one by one.

Its a Jeff Party From here on out But Jordan will get us beat before the final 2 because people will know that if they get rid of Jeff, shes to stupid to win.

i dont watch the feeds

AName, ur an absolute sweetheart... thank you for explaining some of this to me. thanx

Welcome to our site, Rebecca!

Just a quick word of warning - we're a sarcastic bunch so don't be offended when people have a bit of an attitude.

thanx scott. just hate feeling stupid when i have no idea whats going on. i just know what i see on tv and recently started reading here. thanx again

I thought Jordan and Laura were told that they couldn't take naps anywhere except the have not room when they were the have nots.

I have the live feeds on all day because I work from home at my computer.

I don't remember jesse and natalie sleeping in the have not room at all last night. They stayed up as late as they could then slept in the bubble room.

I just think that BB should enforce there rules a little better.

I was really looking foreward to seeing those two suffer.

I watched Jesse and Natalie go to bed around 4:30ish then they got up @ 9 and headed to the 'bubble' room.

Others got away with napping as well - it isn't just a Jesse and Natalie thing. And Actually kevin has just been napping in the red bedroom - its just not as quiet at the bubble room.

I am by no means a fan of Jesse and Natalie - but in this case they aren't doing anything tha the others didnt do.

"Jordan in the hot tub and Jeff still fussing at her for defending Casey who is already gone. Tells her without Lyd and Kev they don't have the numbers so shut the hell up. If she pisses them off and they go back to Jessie side, they are doomed".

Thank you Jeff, this girl dont know her head from azz. You better dump her now man before it comes back to bite you. LOL

If Jeff does'nt cut Jordan loose that will br the reason he will lose this game. He said from his own mouth I will be gone and you will be still be in this *** game. HELLOOOO!